The achievements of an organization are the results of the combined effort of each individual.
—Vince Lombardi 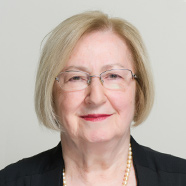 Paulina is a registered Patent Attorney in Israel since 1976. She was the first woman to be registered as a patent attorney in Israel. For 14 years, she was an active member of the Official Committee for the Revision of the Israeli Patents Law and of the Patent Committee of the Manufacturers Association of Israel. She enjoys teaching and lectures on Intellectual Property in various forums. Paulina is the author of the Manual of Industrial Property, 1982, (in Portuguese) ( São Paulo State Secretary of Industry, Commerce, Science and Technology), Brazil and editor of Legal Aspects of Biotechnology, 1989, Jerusalem (Ministry of Science and Technology).

In 2001, Paulina established with her husband Dr. Issachar the Ben-Ami & Associates firm with the purpose to use all her experience in scientific and intellectual property matters to train a new generation of patent attorneys and to provide a high professional and more personal approach to clients. Currently, Paulina dedicates most of her time for the drafting of opinions and advising clients with regard to the strategic planning of their IP based on her long experience in the business world.

B.Sc. in Chemistry from the University of Sao Paulo, Brazil

M.Sc. in Chemistry from the Hebrew University of Jerusalem

Paulina Ben-Ami holds a B.Sc. in Chemistry from the University of Sao Paulo, Brazil, and a M.Sc. in Chemistry from the Hebrew University of Jerusalem, under the supervision of Prof. E..D. Bergman. She started her Ph.D. Thesis in Biochemistry at the Hebrew University under the supervision of Prof. Y. Leibovitz, but did not complete the thesis to accompany her husband to Germany, where she worked in research of diabetes at the Department of Biochemistry of the School of Medicine of Goettingen, Germany. She is co-author of two publications resulting from this research.

In 1968, Paulina joined the Israeli Patent Office as a Patent Examiner in Organic Chemistry. After some years, she became the Head of the Chemical, Pharmaceutical and Biotechnology Division of the Patent Office, a position that she held until 1987. During this period, Paulina undertook several temporary missions in the Latin American countries Brazil, Argentina, Mexico, Guatemala and El Salvador as an expert in Intellectual Property matters before the Patent Offices in said countries in projects of the World Intellectual Property Organization (WIPO).

In 1987, Paulina moved to the biotech industry and joined Interpharm Laboratories Ltd. in Ness-Ziona, at the time a subsidiary of Ares-Serono, Switzerland. As Manager of Patents and Business Development, she was deeply involved in the strategy of the company and participated in many negotiations with large pharmaceutical companies in Europe and in the United States.

From 1990 to 2001, Paulina was Vice-President, Patents and Intellectual Property, of Yeda Research and Development Company, the commercial arm of the Weizmann Institute of Science, Rehovot, Israel. She developed a very close collaboration with the Weizmann scientists that helped her draft and handle successfully the patent applications based on their inventions. During this period, Paulina undertook several temporary missions in Brazil on Patents and Transfer of Technology matters upon invitation of Brazilian authorities.

Paulina and Issachar have 3 children and 7 grandchildren and enjoy music, reading and the weekends with the family.